The final video in our new syllabus showcase series is now live, and we’re ending with Keyboards. Professional keyboard player Rosa Ullmann takes you through some of the songs on the Rock & Pop 2018 Keyboards syllabus, putting her spin on them and telling you why she thinks they’re great to play.

Alicia Keys has been a big inspiration for Rosa, encouraging her, as a learner, to practise techniques such as chords, inversions, and scales – all of which feature heavily in Keys’ songs. ‘If I Ain’t Got You’, in particular, was a ‘really great song for helping my playing mature’. ‘The piano plays a very important part’, Rosa tells us. ‘The triplet motif at the beginning and the end is really beautiful, and helps to express the emotion behind the song’.

There are several techniques that can be used to really enhance your performance of Sia’s ‘Chandelier’, Rosa believes. When leading up to the chorus she suggests using ‘dynamics to really accentuate those builds and make it more dramatic’, and that for the chorus itself, ‘the syncopated rhythm between both hands on the chorus is what elevates this section. It’s very important to include all those little details because that’s what really makes the song come to life and makes the sound much fuller’.

American rock duo, The Black Keys, can be an inspiration to all aspiring musicians, being ‘a great example of a successful rock band who haven’t been manufactured at all’, says Rosa. ‘Just goes to show, if you work hard enough at what you love you can achieve anything’. She plays their track ‘Gold on the Ceiling’ and advises the importance of having a strong foundation with your left hand to ‘keep the time, keep the swung feel, and provide a solid beat’. 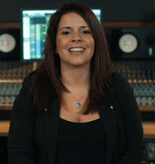 Rosa Ullmann is a London-based keyboard player and composer. She’s supported a range of artists including Lady Gaga, Fatboy Slim, The Chemical Brothers, The Offspring, and The Gossip, and has played at some of the world’s biggest festivals including Wireless, Rock En Seine, Africa Express and Glastonbury.

With a huge range of songs spanning all contemporary styles, the new Rock & Pop 2018 syllabus lets you play the music you love. Find out more about the new syllabus and sign up to hear updates at trinityrock.com/2018.

Take a look at our other showcase videos for Guitar, Drums, Bass and Vocals.

Enter for an exam

Enter for a Rock & Pop exam